Functional organization of the transcriptome in human brain
The enormous complexity of the human brain ultimately derives from a finite set of molecular instructions encoded in the human genome. These instructions can be directly studied by exploring the organization of the brain’s transcriptome through systematic analysis of gene coexpression relationships. We analyzed gene coexpression relationships in microarray data generated from specific human brain regions and identified modules of coexpressed genes that correspond to neurons, oligodendrocytes, astrocytes and microglia. These modules provide an initial description of the transcriptional programs that distinguish the major cell classes of the human brain and indicate that cell type–specific information can be obtained from whole brain tissue without isolating homogeneous populations of cells. Other modules corresponded to additional cell types, organelles, synaptic function, gender differences and the subventricular neurogenic niche. We found that subventricular zone astrocytes, which are thought to function as neural stem cells in adults, have a distinct gene expression pattern relative to protoplasmic astrocytes. Our findings provide a new foundation for neurogenetic inquiries by revealing a robust and previously unrecognized organization to the human brain transcriptome. 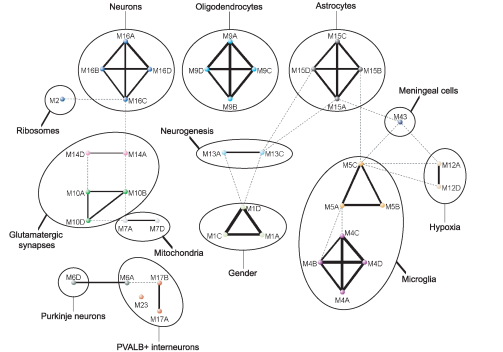 Radial glia require PDGFD–PDGFRb signalling in human but not mouse neocortex
Evolutionary expansion of the human neocortex underlies many of our unique mental abilities. This expansion has been attributed to the increased proliferative potential of radial glia (RG; neural stem cells) and their subventricular dispersion from the periventricular niche during neocortical development. Such adaptations may have evolved through gene expression changes in RG. However, whether or how RG gene expression varies between humans and other species is unknown. Here we show that the transcriptional profiles of human and mouse neocortical RG are broadly conserved during neurogenesis, yet diverge for specific signalling pathways. By analysing differential gene co-expression relationships between the species, we demonstrate that the growth factor PDGFD is specifically expressed by RG in human, but not mouse, corticogenesis. We also show that the expression domain of PDGFRb, the cognate receptor for PDGFD, is evolutionarily divergent, with high expression in the germinal region of dorsal human neocortex but not in the mouse. Pharmacological inhibition of PDGFD–PDGFRb signalling in slice culture prevents normal cell cycle progression of neocortical RG in human, but not mouse. Conversely, injection of recombinant PDGFD or ectopic expression of constitutively active PDGFRb in developing mouse neocortex increases the proportion of RG and their subventricular dispersion. These findings highlight the requirement of PDGFD–PDGFRb sig- nalling for human neocortical development and suggest that local production of growth factors by RG supports the expanded germinal region and progenitor heterogeneity of species with large brains. 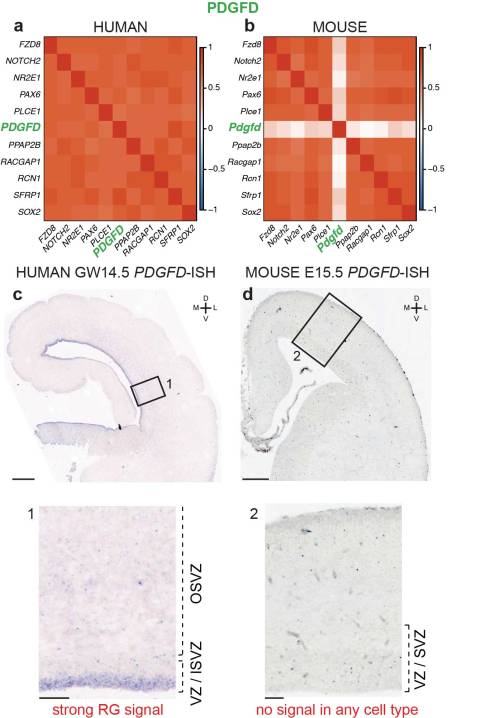 Conservation and evolution of gene coexpression networks in human and chimpanzee brains
Comparisons of gene expression between human and non-human primate brains have identified hundreds of differentially expressed genes, yet translating these lists into key functional distinctions between species has proved difficult. Here we provide a more integrated view of human brain evolution by examining the large-scale organization of gene coexpression networks in human and chimpanzee brains. We identify modules of coexpressed genes that correspond to discrete brain regions and quantify their con- servation between the species. Module conservation in cerebral cortex is significantly weaker than module conservation in sub- cortical brain regions, revealing a striking gradient that parallels known evolutionary hierarchies. We introduce a method for iden- tifying species-specific network connections and demonstrate how differential network connectivity can be used to identify key drivers of evolutionary change. By integrating our results with comparative genomic sequence data and estimates of protein sequence divergence rates, we confirm a number of network predictions and validate these findings. Our results provide in- sights into the molecular bases of primate brain organization and demonstrate the general utility of weighted gene coexpression network analysis.